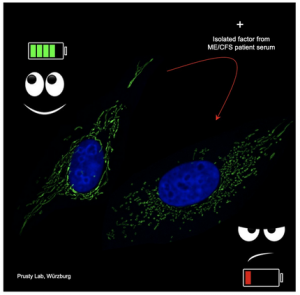 Perhaps one of the most characteristic signs of Myalgic Encephalomyelitis (ME) is the intolerance to any type of exertion whether it is of a passive type brought on by surroundings (hearing a voice, seeing lights), or an effortful type (lifting a cup, holding a conversation). Given this bizarre sign, it is only natural that for many of us and many doctors, the mitochondrion has been a perennial suspect.

Unfortunately, by the end of the 1990s many early findings regarding the mitochondria, such as increased enteroviral RNA in patient’s muscle mitochondria [1], deletions of mitochondrial DNA [2][3] and abnormal mitochondrial morphology [2][4] were not followed up or not replicated by other studies.

However, virtually all of the research in the 1990s and 2000s is fraught with inappropriately using heterogeneous groups of patients due to bad definitions, small sample sizes and widely varying diagnostic experience by study investigators. When two studies are at odds it is often unclear which to accept and which to reject. In the case of the mitochondria, it is very tempting to believe some of the reports of abnormalities were not given a fair chance due to follow-up studies selecting different groups of patients as a consequence of the Fukuda or Oxford Criteria.

The Need for Good Selection Criteria in Practice

The problem of selecting a single disease picture and not many, can be solved by using a rigorous criteria of selection such as the International Consensus Criteria (ICC). It can likely be decreased by using criteria of selection which require the cardinal signs and symptoms of Myalgic Encephalomyelitis; such as the Canadian Consensus Criteria (CCC). Lastly, if the patient group is very severe and has been tested for alternative diagnoses, the study is more likely to be applicable to ME patients at large. This is assumed because many disorders like Sleep Apnea, Chronic Headaches, Nonspecific chronic pain which fall into a broad criteria (e.g. CDC’s Fukuda definition) are not likely to have the severe drop of function seen in the worst-off ME patients.

Hopefully the use of stringent criteria for ME, larger study sizes, and the ability to group patients by temporal stages, will prevent current studies from repeating the mishmash of past decades.
Recently, in trying to develop an assay for ME, the Ron Davis group at Stanford found an altered electrical signal (impedance) in patients’ cells when subjected to osmotic stress [5]. This suggests in a harsh environment patients’ cells don’t have the energy to maintain their voltage gradients–unlike normal cells which do. Besides its usefulness as a diagnostic, Davis’s finding also implicates deficient cellular energy, and therefore the mitochondria, in ME patients.

Other Studies Directly Implicate the Mitochondria

Julia Newton’s group at Newcastle University found reduced mitochondria function [6] in both severely and moderately affected patients. Interestingly, they found “disease severity does not correlate with mitochondrial function and even those with a moderate form of the disease show evidence of mitochondrial dysfunction.” This means the mitochondria function is more like a switch flipped for all patients than a gradient of effect or finding only in a subset. However, severely affected patients did have greater respiratory acidification due to impairments in glycolysis not seen in moderate ones. A straightforward interpretation would be impairment to mitochondrial function is a prerequisite for disease but that downstream effects of disease can impair vital cellular processes like glycolysis.

Another new study by Bhupesh Prusty of the University of Wurzburg, and UCSD’s Robert Naviaux has found that mitochondria from ME patients show dramatic fragmentation in comparison to controls [7][8].

In an experiment with culture cells with latent HHV-6 (containing Human Herpesvirus 6 DNA–but not actual virus particles) chemical reactivation of HHV-6 resulted in the production of several viral RNAs but not major viral proteins. Significantly, Prusty and Naviaux found HHV-6 reactivation induced mitochondrial fragmentation, oxidative changes, and decreased antiviral resistance. When fluid from the cell culture of the HHV-6 reactivated cells was transferred to a new group of cells (not exposed to HHV-6), mitochondrial fragmentation and oxidative changes also occurred in these cells but with increased antiviral resistance! [8]

The last experiment involved transferring not HHV-6 infected cell culture fluid but rather blood serum from ME patients to new cells. This serum transfer induced an identical state of mitochondrial fragmentation, oxidative change, and antiviral resistance! These experiments show that one or more molecule types induced by HHV-6 reactivation are secreted to the outer fluid and can function to induce mitochondrial fragmentation, oxidative changes, and antiviral properties in distant cells. Not only that, but the serum of ME patients acts in exactly this manner (suggesting we have a molecular factor(s) in our blood similar, or the same as, that secreted by the HHV-6 reactivated cells–and which is causing harmful changes to our mitochondria).

A common thread to mitochondrial findings by both Davis and Prusty is the presence of a serum factor, or factors, which could be transferred to the cells of healthy people and inflict the ME cells’ phenotype on well cells. How far this commonality extends (for instance whether serum factor(s) found in Davis’s impedance study is the same as the factor(s) found in Prusty’s study of mitochondrial fragmentation) is currently unknown.

There are two main implications:

Some of the most precocious intra-cellular findings stem from the finding of an abnormal, cleaved, 37 kiloDalton RNase L and dramatic reduction in actin in patients’ cells by the late Robert Suhadolnik [9]. In “Chronic Fatigue Syndrome: a biological approach” [10], by Kenny De Meirleir and colleagues, these findings are expanded into a panoply of intra-cellular dysregulation including defective activation of RNase L by 2-5-A dimers produced by 2-5’A oligoadenylate synthetase, cleavage of Rnase L by m-calpain, and abnormalities in the cell state reminiscent of incompletely induced apoptosis (an essential cell disposal process culminating in cell death). Given the role of mitochondria in both cellular energy and apoptosis, it is hoped that the mitochondrial fragmentation research and antiviral induction research can explain the significance of these findings in a panoramic manner.

One indicator of scientific progress is the ability to place important observations in a single theoretical framework. The findings of induction of mitochondrial fragmentation and a cellular viral resistance state by patient serum could explain one such finding: the impairment of pyruvate dehydrogenase found by Fluge and Mella of Haukeland University, Norway. Prusty’s findings indicated that the mitochondrial fragmentation (caused by both patient serum and HHV-6 infected cell supernatant) potently impaired this very complex!

However starved our own mitochondria may be, this is a very exciting time for mitochondria research in ME and we must ensure these researchers are not starved of funding!